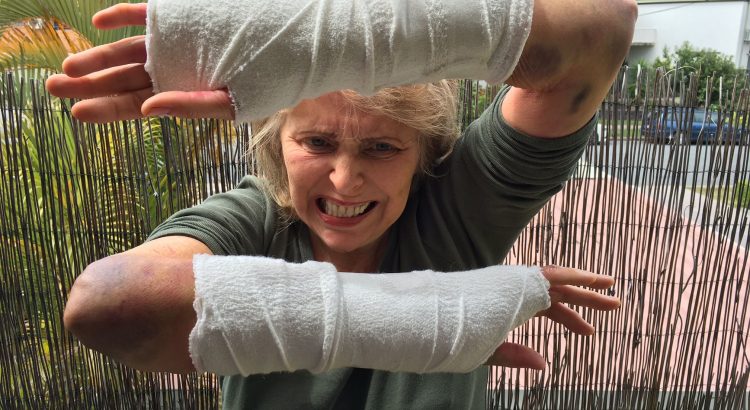 THE DAY MY WRISTS BROKE

I knew when I’d done it, I’d really done it.

Well, the fact that my right wrist was at a strange angle was a bit of a giveaway. I was stuck ignominiously, stupidly and downright dangerously in a driveway, unable to get up, right beside the speed hump I had just tripped over. Shaking hysterically I somehow managed to get hold of my mobile phone and call my son who came in the car, nearly running me down himself, and literally picking me up off the asphalt.

“What the hell were you doing Mum?!” he exclaimed, it being 11am Monday morning and he knows I don’t drink.

What followed was a 10 hour trip to Hospitaland, from Triage to Admin to Overworked Interns, and finally to the MINOR INJURIES waiting room.

Minor injuries! Where they kidding? So I am a professional piano player who had just broken not one but both of my wrists (as was later proven) and these are seen as minor injuries! Obviously the Litmus test for what can go medically wrong with me has a much broader scope in a public hospital than I could have conceived.

So I’m sitting crying and shaking as quietly as I can   in this small room with a dozen or so people within a two meter radius, and they are all pretending they can’t see me and can’t hear me which is slightly ridiculous since I’m virtually sitting on their laps, and whilst I am choking my husband stands on one side and my son on the other (no seats left) determinably looking at the wall opposite.

And so we wait.

Queues are so frustratingly fair!

The professional concert pianist waits in line behind a man with a possible boil on his left little toe, a woman who’s been poked in the eye not very badly, and an older bloke with an ankle that might have been sprained but turned out later it wasn’t. There were at least five of those people with virtually nothing wrong with them and I know this because we all ended up eventually being treated in the next door ward, given a bed or a chair, a file, and painkillers in that order.

And as I am sitting there, I am completely freaked out and overwhelmed by the possible scenario this presents, not only for my career, but for the rest of my life.

Completely freaked out, but not as freaked out as I become when, after a trip to the x-ray room and confirmation that indeed both wrists are broken, they perform a procedure whereby they put a tourniquet on my right arm, pump heavy duty anaesthetic in which will stop my heart in an instant if it gets past that tourniquet, cut off all bloodflow rendering the arm in essence dead (and it certainly looked it), and attempt to manipulate my right wrist back into place.

I found out later this is the same procedure they have been using since 1860, so I guess it must work. It did work, and it was also the only pain I’ve ever experienced greater than childbirth.

But I was okay, I was big and brave!

This thing had happened.

I couldn’t believe I had been so stupid, but it had happened.

There was no going back, it had to be dealt with!

And I was truly alright (at least on the outside) until the dead arm stayed dead for longer than they’d planned (a hold-up with the trolley guy and the x-ray machine), and as I looked down in excruciating pain at the arm of a corpse, yellow and grey, I started having the worst panic attack I’ve ever experienced. It just looked like I would lose my arm. It looked like I HAD lost my arm, even though they had previously explained to me that a limb had to be in this frostbitten state for four hours before there could be any chance of permanent damage.

Hell, that was three hours away so just relax Jan!

What followed was scans and waiting.

By the time I was discharged at 10:30pm that night I’d had nothing to eat or drink since 9am (there being the possibility of an operation later that night so Nil By Mouth), and the cup of tea I ultimately drank at midnight at home was the best cup of tea in my entire life, and believe me, I’ve drunk a helluva lot of cups of tea.

The operation was booked in at the public hospital in Robina, part of the Gold Coast University Hospital, a spectacular new and learned facility, but for all of this I was given three days to think. And to listen to other people’s thoughts, such as, “What, you don’t have PRIVATE health insurance?!, What, you haven’t had your HANDS INSURED?!, What, you’re thinking of going to the PUBLIC hospital?!” followed by many suggestions that I spend every penny I had ever earned and more than I ever might (which at this point in time looked like precisely nothing) to employ the Great God of Squillion Dollar Orthopaedic Surgery on the Gold Coast to perform operations on both wrists to have metal plates inserted.

Some frantic googling and ringing followed, but ultimately lead nowhere as it became clear it was way too expensive, it would delay the operation which could create complications, and anyway who could guarantee that God himself doesn’t have an off day once in awhile?

I can’t believe the numbers of people that say the words PUBLIC hospital, like they are saying PUBLIC toilet (and we all know what they’re like).

In my case they could not have been more wrong.

I went ahead on Friday morning, five small life changing days after the fall, with the orthopaedic registrar who was rostered on, whose name was Chris. I only met Chris a few minutes before the operation but he told me something terribly helpful, in flexing his young, strong, large and capable surgeons hands, looked me in the eye and said “Yes Jan, I understand. If I damaged my hands in any way my career would also be over.”

That and the fact that I knew this ordinary and extraordinary guy had performed 300 to 400 of these so-called routine operations beforehand, (was just finishing one as I was being wheeled in conveyor-belt style), reassured me.

He even calmly and coolly explained how he would slit my wrists, pull the tendons and nerves to one side, insert the plates and stitch me up.

I mean really, how do they do it?!

My feeble skills paled into insignificance when I considered that all I’d ever learned to do was plonk on a piano and write a few songs, and that had been hard enough.

So here I am five days after the operation looking out over the ultra tacky fake-brick PARADISE SUN Units on Surfers Paradise, thinking how lucky I am.

And in saying to a friend “Thank God for the public hospital system” he swiftly replied “Don’t thank God Jan, thank Gough!”

Looking back on the whole circus of the last week, the most bizarre experience of all was waiting in the pre-waiting of the waiting area for the operation.

10 ladies of various ages and ethnic backgrounds in identical blue operating gowns with matching elasticized plastic caps, five along each wall, seated facing each other on identical La-Z-Boy chairs, as if the manicurist was about to enter and join the script of a B-grade TV sitcom. I felt like Lucille Ball about to tell them a bad joke about the concert pianist who broke both her wrists, yet a Lucille-style slapstick gag involving my shining white plaster was something I would have to pass on for the moment.

And the most touching experience? On the trolley looking up before entering the operating theatre to see a small piece of green tape on the ceiling with my father’s initials followed by the word ABOVE.

Sheer coincidence or a meaningful sign, it matters not.

Chris appears to have performed a spectacularly brilliant operation, I have the feeling back in all of my fingers, am managing the pain, and trying to get a grip on my life. Not easily done when you can’t get a grip on a pencil, turn on a tap, wipe your own bum, or take off your cardi.

And as things progress I am eternally grateful for the technology, skill, professionalism, love and humanity that I experienced in, yes, the public hospital system.

And to think that at the moment I fell and my glasses flew off, I was worried that I’d broken them.

The glasses that is.