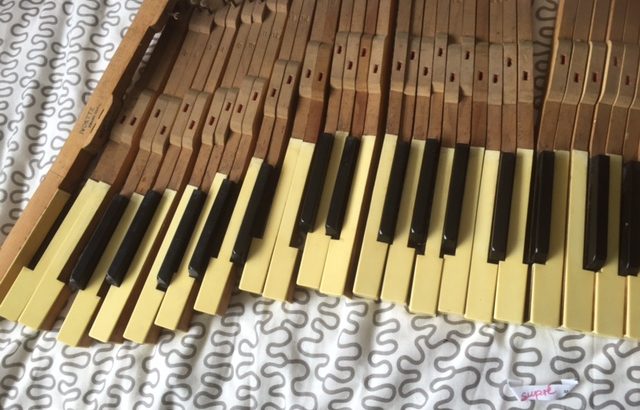 It was the 1980s and having been a popstar with a number 1 hit single in New Zealand I relocated to Sydney, and was living in a flat in Glebe with two other people; my then husband, Martin, and Carl Ecke. Carl Ecke was a big, brown, muscular, magnificent and vibrant German-made upright piano I was in love with at the time.
Indeed, it would seem I was more in love with that piano than my husband, since a couple of years after we moved in, Martin and I divorced and he moved out.
That left me and Carl Ecke all to ourselves.
Heaven!
At last I could play and sing as long and as loud as I wanted.
Throughout 12 years of marriage, my music practicing had always greatly annoyed Martin who accused me of being “so….so….. so loud Jan!”
“There’s no volume control on a piano Martin” I would feebly reply.

I guess the split was always going to come down in Carl Ecke’s favour.

So there I was at the age of 37, overlooking the water from my brilliantly positioned sunny flat, watching the Glebe High School being built and the old Glebe Island Bridge opening and closing, opening and closing as the Russian cargo ships, the Camira and the Conara, sailed through.

At this time I experienced a huge burst of creativity and was playing, singing, and songwriting for hours every day.
It was truly the happiest I’d been in years.

Ah, but there was a catch!
How to pay the rent?
I soon discovered that whilst husbands are handy for rental contributions, Carl Ecke was not.

Ever since I was a small child I was a natural performer, taking to the stage like the proverbial duck to water. My struggling parents had somehow managed to pay for piano, singing, and elocution lessons for me and my sister, and I adored most of all the end of year performances.
Being an entertainer by nature, I had always been a reluctant and impatient piano teacher, but finding myself in such a tight financial situation, I relented and took on a couple of piano students.
I also put feelers out for some kind of playing work, which I eventually found in piano bars and Leagues Clubs throughout Sydney’s outer suburbs.
Having recently been a Popstar playing concerts to hundreds (and sometimes thousands) of adoring fans, you can imagine that it was an ever-so-slight come-down to find myself in the upstairs bar of the Sutherland United Services Club or the Caringbah inn.

I had to find strategies to survive this, and I came up with a few. For instance I always made a point, every single night, of fighting my way out into the kitchen and introducing myself to the dishhand. Getting home in the wee small hours frustrated and exhausted, I could go to sleep in the knowledge that I was much better paid and hadn’t been on my feet all night with my hands in hot soapy water.

And I had Carl Ecke to hang out with all of the next day!

One morning I was walking up to the fruit shop past the Mexican restaurant just around the corner to discover it had changed hands overnight.
Gone was the EL PASO sign, the restaurant’s new name being PIANO RAG and, much to my delight and amazement, there was a black shiny 6 foot Yamaha grand piano on a riser in the window.

I couldn’t believe my luck!
What synchronicity!
Being precisely 45 seconds walk from home, this was surely the perfect gig for me.

I spent an agonizing three days waiting for the joint to open, and as soon as it did I strode in with what I thought was a rather impressive CV, confidently believing a no 1 Hit Single (never mind that no one in Australia had ever heard of it) would surely get me in the door.

But no!
To my horror and amazement they quickly explained to me that the piano was only for SHOW, they didn’t want anybody PLAYING the piano.
I was completely gobsmacked, flummoxed as to why on earth anyone would have a 6 foot good quality Yamaha grand and not want it played?! It simply defied reason.

Before leaving I deposited my card on the bar (remember cards with our phone numbers on that we used in the 1980s?) in the vague hope at some point in the future they might change their minds.

In the meantime it was back to Sutherland and Caringbah.

About a month later my home phone rang (no mobiles in those days) and believe or not, it was the manager from PIANO RAG asking me to come in and play that night.
“But I thought you weren’t having anyone PLAY the piano, I thought the piano was only for SHOW?”
“Yes, well, that’s true Jan. But tonight we have Spike Milligan booked in with a group, and he will only confirm if there is live music.”

Good onya Spike, we got ‘em!

I have since read that all of his life Spike Milligan would only attend venues with live music, couldn’t abide piped music, and was famous for ripping speakers out of lifts in expensive hotels, something I heartily approve of.

So then, what to wear?
Having tried on and discarded several outfits, I settled on a quirky but smart Cyndi Lauper style skirt and shoulder-padded jacket which offset my (then red) massively permed hair.
Like I said, this was the 1980s.

Playing my trademark boogie-woogie and ragtime (but oh so quietly) to the murmurings of cultured conversations and clinkings of wine glasses, I saw Spike Milligan with 2 women enter the room.
I was later told that one of the women was his daughter, the Milligans having had a close and affectionate relationship with Australia ever since Spike’s mother had emigrated and lived for most of her later life in Woy Woy, just north of Sydney.

Hours of boogie and ragtime, conversations and clinking glasses passed, and as the restaurant began to thin out I thought how disappointing that I never got to meet him.
Yet at nearly closing time a serious young waiter approached me with the hushed words “Spike would like you to join him.”

My Cindy Lauper outfit made it across the room, I sat down beside him, and spent the next 15 minutes or so talking to a man that I can honestly say had the most agonizingly tragic face I’ve ever seen on any human being.
The other diners all gone, he took my hand with the words “come with me, my dear, and I will play piano to you.”
And as we strolled arm in arm across the floor of the room towards the Yamaha Grand, I said to him “Gosh, I didn’t realize you played the piano Spike.” The straight man immediately transformed into Eccles, and with that unmistakable “Ying Tong Yiddle I Po” Goons voice replied “Ohhhhh. I didn’t realize I played the piano either!”

What followed was the most heartbreakingly beautiful and skilled version of Autumn Leaves, which I will hold in my musical memory for the rest of my life.

Thank you and God rest you Spike.

So you’d be thinking by now that I would score a regular gig at PIANO RAG?
No way!
I was never invited back, the place closed down soonafter, I heard that my ex husband Martin had remarried (that was quick) and life moved on as it does.
And Carl?
Most of all, I still miss Carl Ecke and greatly regret having sold him.
I do so hope his big, brown, vibrant, quality German sound and touch is giving great pleasure to another woman somewhere.